The Path Forward for PUHSD. Desegregation Funding: History and Impact 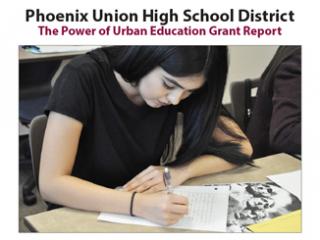 In the report, the Morrison Institute concludes that desegregation programs in Phoenix Union High School District (PUHSD) have their origins in legal actions that were designed to correct inequities arising from a financial crisis that gripped the district 40 years ago. Although the district is no longer under federal court jurisdiction, it still faces many of the fiscal restraints that prompted the original suit.

Arizona’s per-pupil funding is nearly the lowest in the nation, falling some 30 percent below the national average. Even under the best of circumstances Arizona school districts must struggle to meet minimum educational goals. PUHSD contends with several other factors that make educating its students more difficult: It is the poorest high school district in the region with a median household income one-third lower than that of metropolitan Phoenix as a whole;5 it has extremely high mobility, with 20 percent of district residents moving to a different home each year; students are significantly more likely to be raised by a single parent and to live in a household where English is not spoken; and students are significantly less likely to have parents with a college education.

Desegregation funding helps to address those challenges in an environment where education is otherwise sparsely supported financially. Ending desegregation funding would impose dramatic cuts on the district’s operational budget, forcing the closure of three full-service high schools – North, Chavez and Fairfax – that are 100 percent supported by desegregation funding. Closure of these schools would force students in the heart of the district to travel miles across the district to attend another school. This scenario would replicate the conditions that prompted the Castro suit and likely trigger either further court intervention or another lawsuit.

On the positive side, despite the aforementioned challenges PUHSD has an 81 percent four-year graduation rate – 3 points above Arizona’s average graduation rate. The district’s dropout rate (3.2 percent) is less than half of the national average and slightly less than the statewide four-year dropout rate. District officials credit much of PUHSD’s successes to the additional dollars provided by desegregation funding.

Read the report fact sheet, “What do deseg dollars mean to PUHSD?”

Previous:
Phoenix IDA and ACF award $110,000 to the Center for the Future of Arizona to expand civic engagement initiative across PUHSD
Next:
Phoenix IDA Today Newsletter – November 2017 Issue