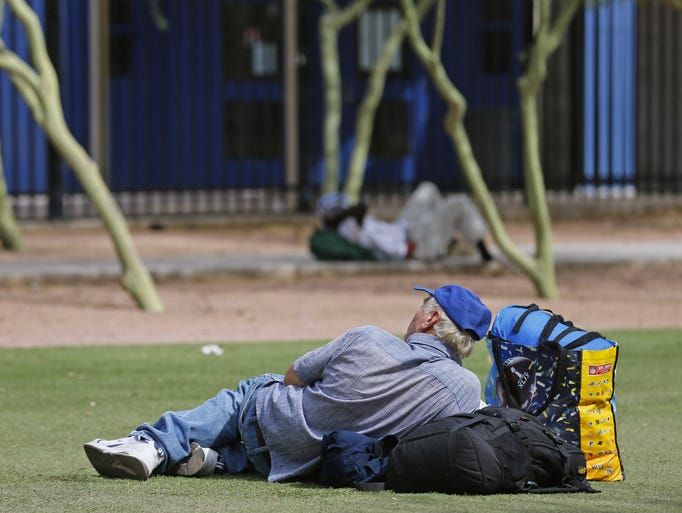 A collaborative of funding agencies say they’re implementing a plan to end homelessness in the Valley. | Here are some of the short-term and long-term steps taken since announcing the closure of the Men’s Overflow Shelter. In this photo, people rest outside the Lodestar Day Resource Center.David Kadlubowski/The Republic

PHOENIX — Two central Phoenix buildings will fill with mats, sheets and backpacks Friday as they are converted into a nighttime shelter for hundreds of people who have been sleeping in a nearby parking lot.

The Lodestar Day Resource Center and St. Vincent de Paul will help replace the Men’s Overflow Shelter, which closed April 1. Both agencies offer services during the day as part of Phoenix’s Human Services Campus, a collection of organizations that work with homeless people near 12th Avenue and Madison Street.

The closure of the overflow shelter — owned by the county and operated by Central Arizona Shelter Services — caused community concern as the most immediate option for the 80 people who stayed there each night became an adjacent parking lot known as the East Lot. The shelter closed because of code violations that county and state officials said would have been too impractical to fix.

Now, $565,000 in state and county contracts with the Lodestar Day Resource Center will fund the new overflow shelter through mid-November. Staff coordinated final preparations this week as bathrooms were upgraded, sleeping mats were cleaned and sheets were purchased.

About 160 people can sleep in Lodestar Day Resource Center, while St. Vincent de Paul will hold an additional 80 to 100. An outdoor turf area enclosed on the campus will provide additional space.

Agency leaders expect to accommodate from 350 to 400 people a night based on the numbers recently seen in the East Lot. Before its phaseout, the Men’s Overflow Shelter housed more than 200 each night.

The opening is a catalyst for the plan developed by a group of agencies seeking to end homelessness. The groups — including the Valley of the Sun United Way, Maricopa County, the Arizona Department of Housing, the Arizona Department of Economic Security and the city of Phoenix — are trying a model where homeless people are first placed in housing and then supported with the services needed to improve other aspects of their lives.

A better emergency-shelter system is a major step in getting them there, said Bruce Liggett, director of the Maricopa County Human Services Department.

“The whole model is changing,” he said.

The Men’s Overflow Shelter was opened in 2006 as an emergency measure to protect people from extreme heat. The East Lot opened in 2013 as a place where people could sleep legally and safely. With the opening of the new shelter, both will be closed.

Since April, an average of nearly 400 people have slept in the East Lot each night, according to a report by the city. Users of the East Lot don’t need to provide identification and are not necessarily connected to services.

“One of the big barriers we’ve always had is we didn’t know who was out there,” said David Bridge, managing director of the Lodestar Day Resource Center.

“One of the big barriers we’ve always had is we didn’t know who was out there.”

The shelter opening Friday will have more rules, Bridge said, but also more engagement. He said the organization may seek volunteers and donations as needs are assessed.

People must have a campus identification to enter the shelter. They cannot re-enter throughout the night, and men and women will sleep separately. Trained staff will be on site in addition to security.

Tracking people using the shelter will connect them to housing more quickly as it becomes available, Bridge said. Staff at the campus assess how much support people need to end their homelessness or if they can be diverted from the system entirely.

And resources are increasing to provide them with housing, Liggett said.

Last month, the Phoenix and Maricopa County Industrial Development Authorities and Valley of the Sun United Way committed $2.5 million to find housing for 250 people. A contract to start the services should be in place in June, Liggett said.

“It’s really an unprecedented infusion of new resources,” he said.

By November, the agencies aim to house 300 people and have data on the rest, Liggett said. The agencies will then determine how to move forward with emergency shelter.

Advocates for the homeless said they’re cautiously optimistic about the plans but will keep an eye on the execution.

Amy McMullen, co-founder of the Maricopa Alliance for Shelter and Housing, said her group will be monitoring the transition to the new shelter to ensure nobody falls through the cracks, especially those who might leave a more structured system for the streets.

“It’s going to be a change in the flow and dynamic,” McMullen said.

Phoenix officials addressed concerns about the impact on neighborhoods this week through a report to the City Council Public Safety and Veterans Subcommittee.

Phoenix police have responded to individual reports of homeless people in neighborhoods since the closure of the Men’s Overflow Shelter, but the change hasn’t been overwhelming, police spokesman Sgt. Trent Crump said.

Numbers at the East Lot have not increased significantly since the closure of the Men’s Overflow Shelter. But because agencies have little data on the users of emergency-shelter services, it’s difficult to tell who is going where, Liggett said.

Now, an outreach team will aim to engage with homeless people outside of the campus, respond to neighborhood concerns and track data on the impact.

Public officials and campus leaders explained the changes last week to users of the East Lot and Men’s Overflow Shelter. With their concerns over rules and logistics came interest in how quickly they could find housing.

“Ramping up is going to be challenging,” Liggett said. “But we’ve got the resources to do it.”

Next:
Announcing Our Honorees for Profiles of Success 2015