The Yuma Sun had barely hit the streets Saturday before an article about elderly victims of a house fire facing homelessness led to a life-changing phone call from an assisted living facility offering a miracle.

Five days after a fire made him homeless on his birthday, Bill Borgman received a late gift – a much-needed place to live. Borgman and his roommate, Sal Asselta, moved into Veterans Assisted Living for Veterans and Friends on Sunday morning.

Borgman told the Yuma Sun last week that he and Asselta didn’t know where they would live after they had used up their five-night motel stay that the Red Cross had provided. “Basically, we are are needing a place to live,” he told the newspaper.

Richard Neault, chief executive officer with MMG Medical Management Group, said he read the article about Borgman and Asselta and knew his facility, which is soon to open in Yuma, could definitely come to the rescue.

“We can help. That’s what we are here for,” Neault said, adding that he was “somewhat overwhelmed in a positive way” when he read about the longtime friends’ plight.

Veterans Assisted Living for Veterans and Friends is set to officially open in July on the grounds of the former Clarion Suites, located next to McDonald’s on 4th Avenue in Yuma. “We have units that are ready, (although) we are not operating as a licensed facility yet,” Neault explained. “We have a staff in training preparing for licensing so (the men) are here as independent residents.”

He added that staff members are currently available 24 hours a day.

The friends moved into their new home just five days after fire struck their property at 161 N. 9th Ave. in Yuma. Borgman celebrated his 75th birthday last week, while Asselta is 81. Their property was not insured. Neither was a car destroyed by the blaze.

Borgman said he can’t believe Yuma’s generosity, starting with the offer of a place to live, all the way down to small donations being dropped off at the real estate office.

Borgman and Asselta moved into a furnished apartment at Veterans Assisted Living for Veterans and Friends that features a large bedroom with two beds, a living room, bathroom and a cooking area.

“Because of age and some medical conditions, we will help them apply for various programs,” Neault said. “We’ll figure a way for them to become permanent residents, if that’s their choice.”

Borgman said he and Asselta would certainly like to call the place home for as long as they can.

“Oh, it’s gorgeous! It was probably one of the nicest places in town when it was a hotel,” Borgman said, adding that Asselta is “thrilled to death” with his new home.

The four-acre complex will feature 160 fully furnished one-bedroom apartments. The facility will provide three meals daily, housekeeping, laundry and assistance with bathing and dressing shuttle. A nurse will be on call around the clock.

Veterans will be a special focus for the new venture, but housing will be open for non-veterans as well.

Veterans Assisted Living for Veterans and Friends was developed by MMG Medical Management Group, then turned over to Tucson-based Family Housing Resources, a nonprofit organization. Neault said day-to-day operations of the facility will be handled by MMG and Solterra Senior Living. 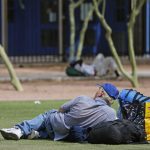