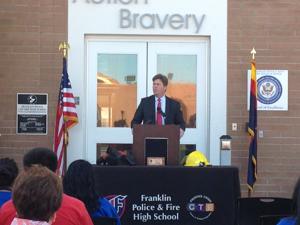 A crowd of approximately 130 people gathered on Tuesday at Franklin Police and Fire High School, located on McDowell Road and 17th Avenue. The crowd, mostly students, watched with silence and respect as the Arizona and U.S. flags were presented before reciting the Pledge of Allegiance.

Stanton then took to the podium and thanked school principal Lorenzo Cabrera and the students for hosting the event and for being “one of the best high schools in the United States of America, you got the blue ribbon to prove it.”

The blue ribbon is awarded by the U.S. Department of Education to schools for their academic excellence and for closing the gaps among subgroups regardless of ethnic background or ZIP code.

After recalling a little bit of history and when the school was created, using a historic building dating back to 1926. The mayor then introduced the Home in 5 program.

“We are helping to make home ownership a reality for our hardest working residents, first respondents and teachers” said Stanton.

The program is designed to help low-to-moderate income homebuyers obtain FHA, VA, USDA-RD or conventional loans on new or existing homes in Phoenix or Maricopa County. Those who qualify, obtain a 30-year fixed rate loan with a 4 percent grant for helping with down payments and closing costs. Military personnel are eligible for an additional 1 percent grant and in the fall of 2015, first responders and teachers also became eligible for the additional 1 percent grant, for a 5 percent total.

The mayor explained to the students how these numbers might not mean much now, but that it would not be long before they would be significant to them.

“That’s enough to give people extra boost, to be able to build the American Dream, to build home ownership,” added Stanton.

From a slow start in 2012 when the program was launched by the Phoenix IDA and Maricopa IDA, the Home in 5 program has already proven successful. With 110 lenders and more than 7600 families and individuals who have purchased homes through the program and over $60 million in down payment assistance, including $360,000 in additional assistance to qualified military personnel on $1.3 billion in loans. The program occupies more than 25 percent of the FHA loans in Maricopa County, according to Phoenix IDA, but continues to grow.

Cabrera did not have much to say, but did make emphasis on the importance of the family.

“We are here celebrating,” said Cabrera. “It takes a family to raise a child.”

Pastor addressed the difficulties presented when buying a home. Such as raising the $10,000 or $20,000 for the down payment and closing costs depending on the size and type of loan.

“At the end of the day, it’s about, to me, looking in the future, looking at who are those in our community that serve, respect and give and give and give,” said Pastor when addressing the aspiring police officers and firefighters.

• Alex Barahona is a junior at the Walter Cronkite School of Journalism and Mass Communication at Arizona State University.