The Council vote approved a Historic Preservation (HP) General Obligation (GO) Bond Funds grant of up to $120,000 to the State of Arizona to assist with rehabilitation of the historic WPA Building. Coupled with $80,000 approved on March 28, 2016 by the Phoenix Industrial Development Authority (IDA ), a total of $200,000 would be contributed for rehabilitation of the WPA Building, which matches the total recommended by the Historic Preservation Commission and the Council Neighborhoods, Housing, and Development Subcommittee. Further request authorization for the City Controller to disburse all funds related to this item.

The WPA Building (also known as the Civic Building or Floriculture Building) was constructed in 1938 by the Works Progress Administration for use as its Arizona headquarters. It is a highly significant Art Moderne -style building utilizing cast-in-place concrete and adobe construction. The building was slated for demolition in July 2014, however, at the urging of the City of Phoenix and preservation advocates, Arizona State Fair officials approved a one-year stay of demolition. In January 2016, the Arizona Exposition & State Fair Board approved another 90-day stay of demolition to allow the community additional time to raise funds. However, the Board attached several conditions to the approval, including a benchmark of $120,000 for fundraising efforts. City staff has agreed to assist the community with fundraising efforts by recommending the use of available HP GO Bond funds in the form of a Warehouse & Threatened Building grant.

District 4 Councilwoman Laura Pastor applauded the vote, saying in a statement: “Today the City of Phoenix took the lead on rescuing a piece of history in the heart of our city. The historic WPA Administration building has stood at the Arizona State Fairgrounds since 1938, once housing New Deal era programs, but it has fallen into disrepair.

Advocacy from community members and the leadership of the Historic Preservation Office and Historic Preservation Commission have resulted in today’s City Council approval of a $120,000 historic preservation bond grant. This will be combined with $80,000 in funding recently provided by Phoenix IDA, so efforts can begin to repair the roof of the building and take steps to ready the property for future use.

I applaud my council colleagues and Phoenix IDA for making this funding available. The WPA building is an architectural and historical icon, and this grant is a testament to the City’s commitment to upholding preservation efforts. I hope that the renovation will spark more revitalization in the area.”

The recommended amount of HP GO Bond Funds are currently available in the HP Capital Improvement Program budget. The funds will be used as a potential match for donations raised by the community and/or the State of Arizona. In exchange for the grant funds, the City will receive a conservation easement of 30 years, on the exterior of the WPA Administration Building.

Previous:
The Most Influential Minority Business Leaders of 2016 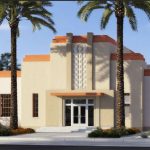 Next:
Phoenix Pledges $200,000 To Save State Fairground Building