Phoenix IDA and ACF award $110,000 to the Center for the Future of Arizona to expand civic engagement initiative across PUHSD

Phoenix IDA, in partnership with Arizona Community Foundation (ACF), today announced a $110,000 grant award to the Center for the Future of Arizona (CFA) in support of its Participatory Budgeting initiative and partnership expansion with Phoenix Union High School District (PUHSD).

“The progress of ‘making decisions about funding’ that PUHSD students are learning in Participatory Budgeting is relevant in terms of the real-life challenges faced in government,” said Juan Salgado, Executive Director, Phoenix IDA.

PUHSD is the first district in the U.S. to implement the Participatory Budgeting process using districtwide funds. Piloted with five public high schools in early 2017, the initiative is expected to expand districtwide and will affect more than 27,000 students by 2018. 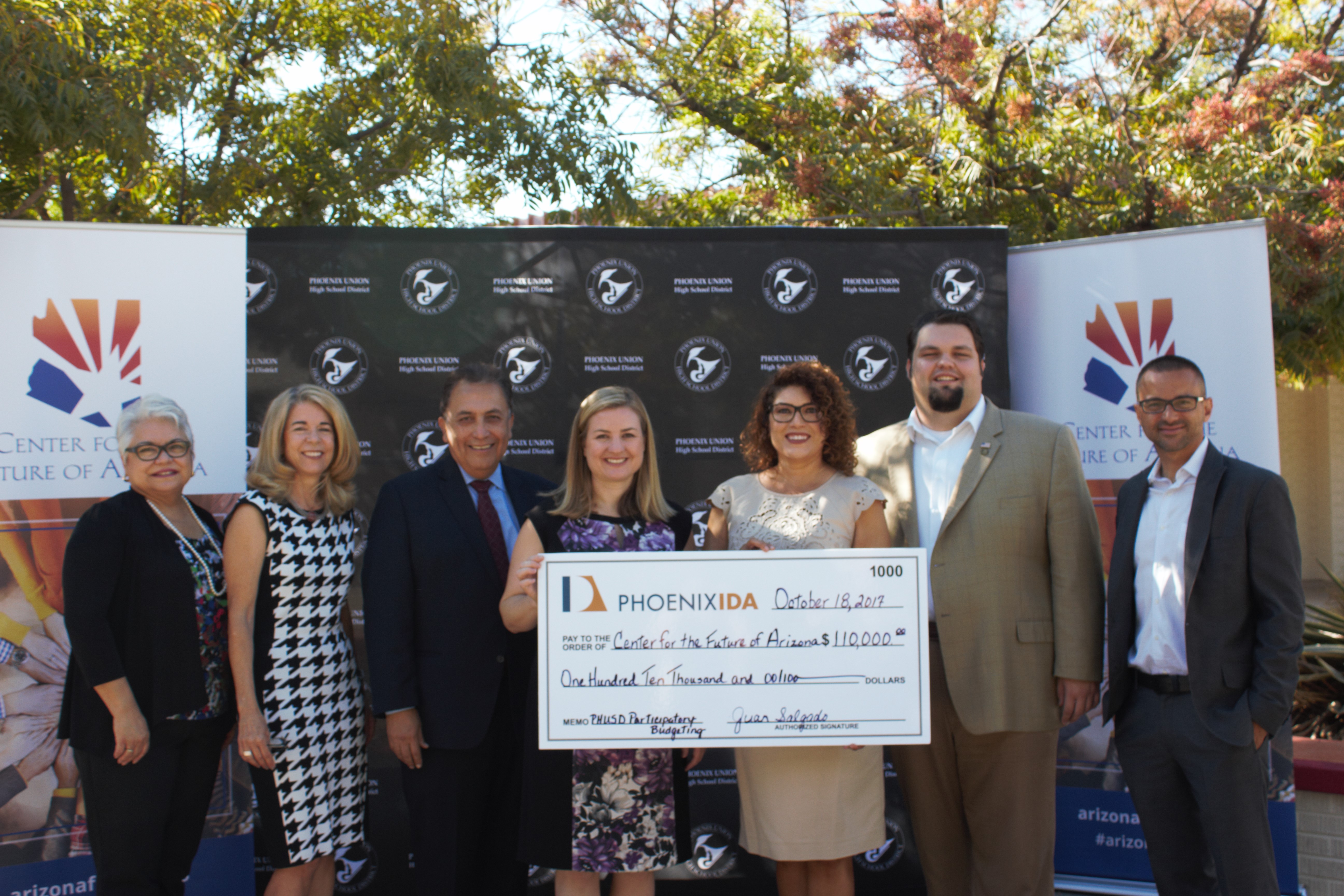 Participatory Budgeting at PUHSD is designed to encourage students to “learn democracy by doing democracy.” Throughout the school year, students brainstorm ideas for school improvement projects and develop these ideas into full proposals. Students select winning projects by casting votes at each campus with more than $55,000 in district funds available for allocation.

“Developing young people who are engaged in civic life begins by supporting a robust educational experience inclusive of academics and citizenship skills,” said Lattie F. Coor, Chairman and CEO, Center for the Future of Arizona. “Our partnership with Phoenix Union in Participatory Budgeting is part of a model-setting initiative that is helping students acquire the skills necessary to become leaders who can identify and solve problem in our communities.”

Students at Bioscience, Carl Hayden, Central, Franklin Police and Fire, and Phoenix Coding Academy were part of the inaugural cohort of schools when the Participatory Budgeting initiative began at PUHSD in March 2017 and has since expanded to 10 high schools. All schools districtwide are expected to participate by 2018.

“The impact that the PB experience is having on students and our educational community at Phoenix Union can’t be understated,” said Dr. Chad E. Gestson, Superintendent, PUHSD. “The initiative is helping us to create an environment that nurtures leadership in our students, promotes civic engagement and builds community throughout every school within our district.”

“ACF is proud to be a partner with the Phoenix IDA in rolling out the Participatory Budgeting initiative within the Phoenix Union High School District,” said Steve Seleznow, President and CEO, Arizona Community Foundation. “Students will get to engage in the challenges faced by schools and government funding and learn how to be good civic minded decision-makers.”

Participatory Budgeting is a new approach for building stronger school communities and developing students who are more informed, empowered and engaged in civic life.

The process consists of five steps led by students with the support of teachers and the community. Student leaders and their teams: